Vegan REVOLution – the way to a sustainable and fair clothes collection 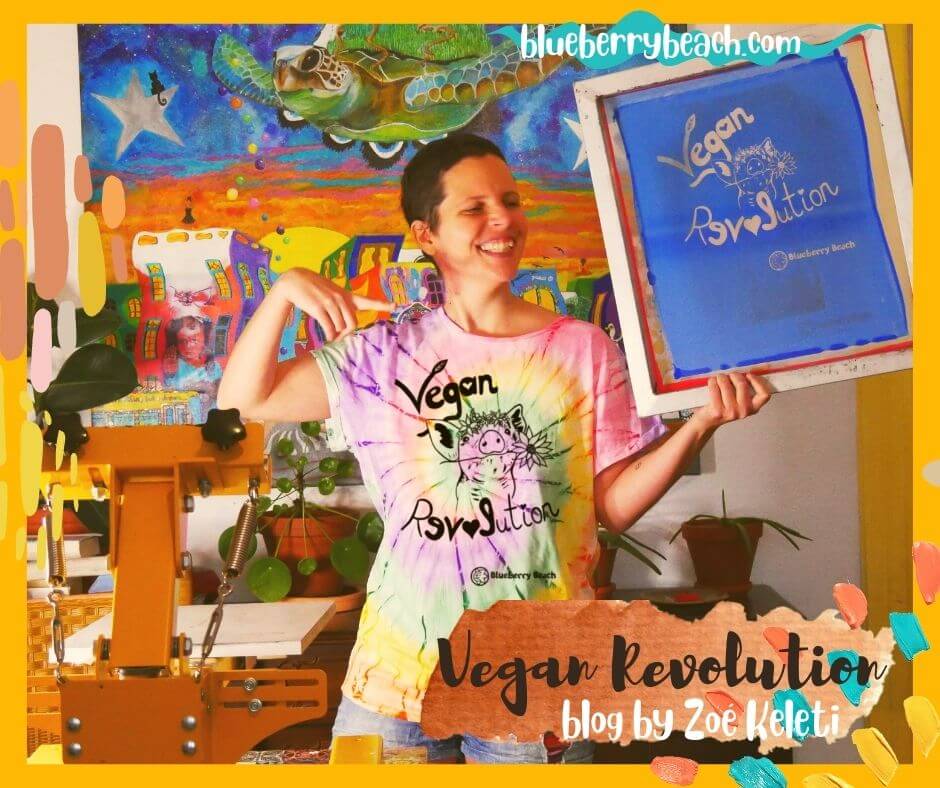 I always loved to go shopping. But in the last years it is even more fun.  Why? It is easy. A few years ago the vegan selection of supermarkets was only beans, veggies and a few more things that were accidentally vegan, but in Leipzig most of the supermarkets are changed from cemetery to garden.

The shelves with plant-base milk are now bigger than the ones with cowmilk, there are whole fridges, where you can find vegan tuna, plant-based mozzarella, all kinds of tofu and actually everything what my vegan heart can wish for. And it happens with me more and more that the person before me at the cash desk has also only plant based products in the basket.

The vegan revolution is alive and a lot of people agrees with me when I say: The future is vegan.

Maybe you know, that I am a painter. But beside brushes and canvas,  I have another big passion: clothes. I already loved textiles when i was little and helped my grandmother folding shirts after ironing. Later I tried to fill holes in my mould with obsessive shopping, until I realised, that although my wallet got thinner, my closet fuller, my soul stayed the same. I selected the mountains of clothes and kept only the favourite pieces.   But with them I also kept my love to clothes.

Then came years of nomadic lifestyle where I traveled with my VW bus and lived from backpacks.  But when in 2019 I came to Bremen and lived in a house project, an idea came to me. Why not connecting art with my love to clothes. The idea of developing a clothes collection with self designed motives was born.

After I informed myself, I realised that screen print is the best method for me. I was really happy for the idea to make my art wearable and reachable for everyone. As a first motive I chose my heart project.

Maybe some of you remember the T-shirts and bags from the first edition of the Vegan Revolution with the magical fox. Everything started with this. Or maybe not?

I think it more started at the time when we lived in the mountains of Portugal in the enchanted valley. There we not only built a house with our own hands, but also developed the concept of the LoveRevolution. We wanted to show with it that real changes can only be reached with love. Aggression, hate and fear will nor open hearts to let new ideas in.

At this time I was not vegan and did not know that still a lot of changes await me. I will make it short, that we do not loose the focus from the screen print. WE felt the climate change on our own skin. It came with 30 metres big flames down the mountains and we decided to leave, to let this dream behind and already with a growing little wonder in my belly we went to Hungary. Our little son came there to the world and our life changed again completely.

Maybe because of the hormones or maybe because of the pure love I felt for this tiny being, I started to empathise with all mothers. And by this I also mean all mothers walking on four legs or having wings. It hit me with so much sadness what these mothers have to endure every day, that I could cry and actually I did, many times.

I mean, how can it leave us untouched, when we realise that every day beings are inseminated without consent and after they give birth their babies are taken away. I was now also a mother and I could feel their pain deep in my heart. I wished that all mother had the chance to see their baby grow up and give them all the love and care they deserve.

There was no other choice for me than to become vegan and do not contribute anymore to the cruelty of the dairy and egg industry.

And like this the Loverevolution changed to Vegan Revolution.

Of course this time also revolution with LOVE written big in it. Because no matter the pain, anger and desperation I felt, I still believed that real change can be only reached with love in our hearts.

It took me long time to find the fitting picture for this slogan.  In Bremen I developed the magical fox I already told you about. But I felt it was still not perfect.

Some of us who were not born vegan, but made this decision later, experience at some point the guilt and pain for not doing it earlier and for contributing to this system of exploitation. For me this little pig with the flower is a sign to let these feelings go and concentrate on the now, on filling my heart with love and be the change I wish to see in the world.

Now I again reworked this motive, using the experiences I gained in screen printing in the meantime. I will short explain you how a screen print motive is made, and what are the steps until it gets on the textil. Making screen print by myself helped me so much to appreciate clothes made fair, with love and with heart.

It took a while again. I participated in many vegan events, exhibited my art in different cities and finally met Schokuhminza on the vegan Streetday in Dortmund. A great foundation with a great idea. These wonderful people support animals that have been released from their captivity and refer them to sanctuaries. I decided to support Schokuhminza. I painted a picture, auctioned it off and donated the proceeds.

The picture I had painted was the little pig with the flower crown. Maybe you know it from my postcards or as an art print.

For me, animals with a flower crown symbolize freedom on the one hand and unity with nature on the other. But the screen print motif wasn’t quite finished yet. Because some of us who weren’t born vegan, but made that decision later, will at some point experience the guilt and pain of not having done it sooner. I too had to come to terms with myself because I contributed to this system of exploitation for years.

So I painted another flower for the pig that it holds in its mouth. A gesture of forgiveness and letting go of those negative feelings. I was finally able to focus on the here and now again and be the change I want to see in the world.

In the last few days I have revised this motif once again, using the experience I have now made with screen printing. Because it’s not as easy as I imagined it to be at the beginning. And the many hundreds of items of clothing that I have printed myself, the many screens that I have coated and then decoated again, the bleeding color and the results that do not last while washing have helped me to appreciate clothes that are fair and with love and heart have been done.

So here’s a look behind the scenes, on the often rocky road to the finished garment: First, I create the motif digitally with an iPad Pro and the Procreate program. Then I print the finished motif on a transparent film. Sounds simple enough, but, as described above, it sometimes even takes years for the idea for the motif to mature.

Now I’ll take care of the screen. For this I apply a light-sensitive emulsion. If you can, it’s easy. But it will take a while before you can do it. And if you should make a mistake later, you can wash everything off again and start over the next day, when the screen has dried again.

If the screen is coated, the film with the motif is used. To do this, I put the film on the coated screen and illuminate both with a very strong lamp. Where the light hits the emulsion, it becomes hard. Where the black lines and surfaces of the subject block the light, it remains soft and can be washed out.

I use water-based and environmentally friendly inks for printing. However, this must still be fixed after the textile has been printed. So you can wash it later at 60 degrees. In the beginning I used an iron for this. But that takes a long time and still doesn’t work properly. That’s why at some point I invested in a real heat press to professionally fix your motif.

And if you like, check out the ready bags here:

And here you can find T-shirts and hoodies. Still not all the products are uploaded, so you are welcome to write us if you would like to have another colour.

Here is the little pig postcard:

Love me don’t eat me postcard